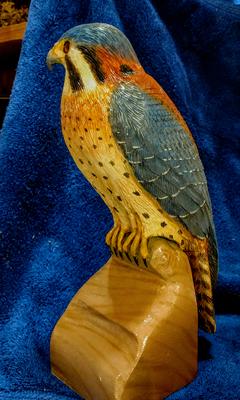 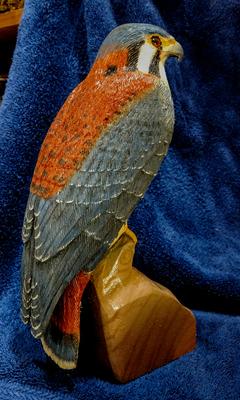 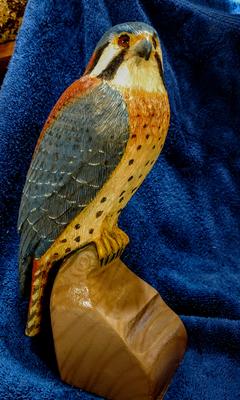 September 2018: American Kestrel carved from Basswood. This life size American Kestrel carving I created from basswood was donated to the Northwoods Wildlife Center in Minocqua, WI for their fundraiser banquet on September 20, 2018. The Northwoods Wildlife Center is a non-profit wildlife rehabilitation and education center. They admit over 700 animals/birds/reptiles a year for medical treatment and care. They provide rescue, rehabilitation and release services for over 100 different species. They are one of the most established wildlife rehabilitation centers in Wisconsin. The dollars raised at this year's banquet will aid in providing services to injured critters in the weeks and months ahead. 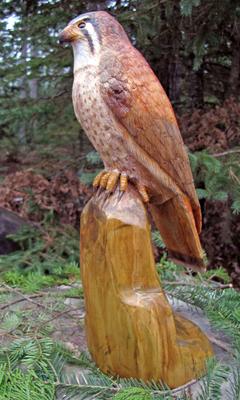 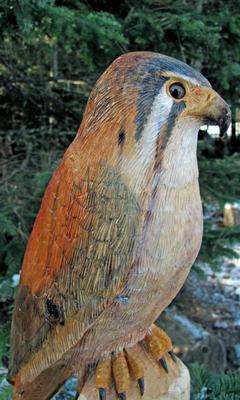 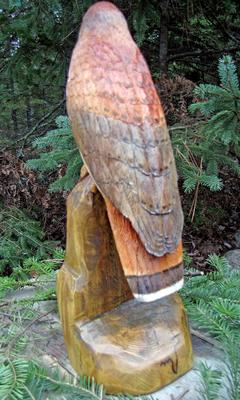 North America’s littlest falcon, the American Kestrel packs a predator’s fierce intensity into its small body. It's one of the most colorful of all raptors: the male’s slate-blue head and wings contrast elegantly with his rusty-red back and tail; the female has the same warm reddish on her wings, back, and tail. Hunting for insects and other small prey in open territory, kestrels perch on wires or poles, or hover facing into the wind, flapping and adjusting their long tails to stay in place. Kestrels are declining in parts of their range; you can help them by putting up nest boxes.